Governor Christopher T. Sununu is the 82nd Governor of the State of New Hampshire and is currently serving his second term. 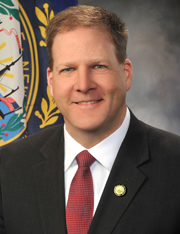 Governor Sununu's leadership has garnered a number of awards including the New Futures' 2017 President's Award for championing policies that improve the health and wellness of all Granite Staters. He is one of only five Governors honored by AARP with their Capitol Caregiver 2017 award and received CASA's 2018 John McDermott Champion of Children Award.

In 2018, Governor Sununu announced the nationwide launch of his Recovery Friendly Workplace Initiative to engage employers and empower workplaces to provide support for people recovering from substance use disorder.

Before being elected Governor in 2016, Chris served three terms on the New Hampshire Executive Council representing 32 cities and towns in Rockingham and Hillsborough counties.

In 2010, Chris led a group of investors in the buyout of Waterville Valley Resort where he worked as Chief Executive Officer and was in charge of an expansion of the ski resort done in cooperation with the United States Forest Service.

An environmental engineer, Chris worked for ten years cleaning up hazardous waste sites across the country.

In 1998, Chris completed a five-month through-hike of the Appalachian Trail from Maine to Georgia.

Chris grew up in Salem, NH. He graduated from Massachusetts Institute of Technology (M.I.T.) with a BS in Civil/Environmental Engineering.

Governor Sununu lives in Newfields with his wife, Valerie, and their three children, Calvin, Edie, and Leo.